Squirrels. Mice. Ducks and their eggs.  An unstable pigeon.  Countless mourning doves.  And bones and carcasses of unknown origin.

These are just some of the casualties that my backyard has witnessed and, as a by-product, so have I.  As I write this, I know there are several feathers being tossed around by the vigorous autumn wind in the side yard leading to the back.  I also know that when I wander out soon to put the gardens to bed for the winter, I will be greeted by more signs of decay.

My son has dubbed this natural, urban arena “Death Backyard”.  As his dog uses the space for zoomies, frisbee catch and defecations, he gets to see first-hand the death in the form of clusters of feathers and delicate rib cages.  Odds are they’re from mourning doves who too slow for the neighbourhood hawks.  His preference would be to hermetically seal off the yard to keep out all the bugs, rodents and, of course, death.

The property sits in a section of town between two mid-sized cities and is affectionately known as Midtown. Through the eyes of Google Earth, the backyard is mostly hidden by a vast canopy of trees. This makes it unique to the neighbourhood that used to be an industrial hub and where old factories now house condos and spunky tech start ups.

Squirrels have met their demise in the rain barrel overflow bucket. Mice seemed to get left in the middle of the yard by a predator who either got distracted by tastier prey or was about to become prey.  A couple of ducks got lost on their way back to the local river and decided to lay their eggs on our back lawn instead of the more hidden patches of lily-of-the-valley and other ground cover less than a foot away.  Unfortunately, the lawnmower scrambled those eggs and eventually the ducks waddled off sans ducklings. 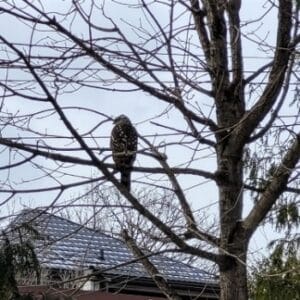 Pigeons are a regular sighting at one of nearby factories yet to be gentrified in the area but this was the first one to visit our yard.  Dazed and confused, I wondered if it had come to our yard to die given its reputation.  And then there’s the mourning doves.  There’s just no accounting for their slothful pace.  I’m surprised they even get off the ground in time when the dog, motivated by urgency, runs out unexpectedly for a pee.

I wasn’t raised on a farm nor did I grow up exploring nature.  If I had been, I would likely not be writing about death in my yard because it would be as common as writing about the sun rise or sun set. Truth be told, I’ve had more direct experience of the death of humans growing up than I did with animals, domestic or otherwise.

When my children were young and he was only 60, my father’s cancer started in his kidney then migrated to his hip bone. It was an aggressive form and the hip bone finally cracked under the pressure which resulted in a limp. When the medical team informed us that palliative care was the plan and that his days were numbered, all six children came home.

There was no designated palliative ward in the small town hospital so we all took turns sitting by his side. Two by two, doing six hours shifts around the clock. This went on for over a week.  Almost everything gradually dimmed over the days of vigil; his lucidity, our hope and our energy.

One shift, the final one, I was with my youngest sister when his pallor and breathing changed. He’d been in sleep mode for a few days so the end of times signs were subtle. My sister went to the payphone in the hallway and called the family to tell them it was time to come.

As we gathered around him, we watched his breath for more changes that signalled the end.  And, as if in solidarity with him, it was as if we were holding our collective breaths.  Someone broke the tension with an irreverent joke that he would have absolutely loved and we laughed and continued the off-colour banter.  After a few minutes, my mom audibly sucked in her breath and, without even looking at him, we all knew.  Tears and silence. Silence and relief. Relief and grief.  Later we reflected that it was as if he was waiting for us all to get there and just chill out before he took his leave.  After we’d had time to sit with the reality of our father’s body without breath, I went to the nurses station and choked on the words “my father is gone”.

Back in my yard, almost two decades later, the helpless pigeon wandered aimlessly looking for a final resting place for over twenty-four hours. I took many walks from my office at the front of the house to the window looking into the backyard to see where it was. I placed shallow containers of water around the yard, in case it was thirsty.  I’d come out on my breaks and sit in the yard watching it.  Speaking to it in quiet tones. Telling it that it was okay to go.  That this was a safe place. I had said the same words to my father in his restless, morphine-soaked slumber.

Death in my backyard feels different but similar. The physical act of removing carcasses takes an extraordinary amount of sensory buffering work for me and feels like the stuff of horror movies I can’t watch. There was no one to call to take care of the physical remnants of pain and suffering.  And, I wondered if I’d had the stomach of a farmer or outdoorsy person, could I have been more proactive to end the pigeon’s suffering in the first place?

A full day after the pigeon arrived, I found it underneath the stairs with its head bowed, resting in the corner of the cement walls of the house’s foundation.  Alone at the end.  The lump in my throat surprised me.  I dug deep within me to find the will to get the spade, dig a hole in my yard and lift the limp, feathered body into it.  I let go of some stored grief for many, many things as I filled the hole up.

Since my father died, I regularly think about death. I read books by others who contemplate death as part of their spiritual practice.  And regularly reading obituaries and meditating on impermanence are two of my own contemplative practices. I find it more soothing interacting with the reality of death than the toxic positivity of only focusing on what are considered ‘happy’ thoughts.

I read somewhere that death in a backyard is a sign that the yard is an integral part of the ecosystem.  Alongside the remnants of death, I also see a wide variety animals, birds and humans that are breathing, learning and surviving.

Decay and demise are necessary parts of the whole of living.

In my backyard. And in life.

a mind of its own