the gift of waiting

We must let go of the life we have planned, so as to accept the one that is waiting for us.

Waking up this past week in la belle province was a gift I gave myself in light of several significant losses that were weaved loosely throughout the fabric of my autumn. Although not intended as a way to avoid the discomfort of the stories that often accompany my sadness, the simple of act of choosing a new action despite my learned pattern to become inert with grief was a beneficial choice, for me. 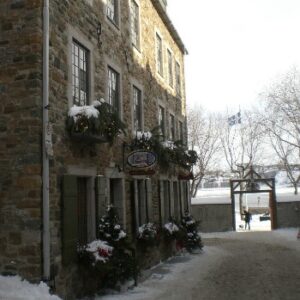 A delightful discovery was that, within the enchanting packaging of this winter-wonderland excursion, were other smaller, plain gifts that continue to be unwrapped and treasured.

The most significant surprise of the week was most definitely the gift of waiting.

Travel involves waiting. A lot of it. In long lines at ticket booths, train stations, at stop lights and icy crosswalks. Waiting for the sun to finally come out or for breakfast to be served. Waiting for a companion to be ready move on in the rhythm of camaraderie and a shared experience. Waiting for a cab to arrive or for toes and noses to thaw once back inside and away from the chilling wind.

The gift of waiting is specifically noticeable in how it presents as a perceived loss of control. Not a comfortable place for anyone and an area where I have much to learn. But the discomfort quickly morphs into anticipation with the choice of a new outlook. Waiting generously gives us the gift of courage by allowing us to give up the illusion that we have much control over anything. No amount of planning, analyzing or clarity of expectation can replace the inevitable times of doing nothing but waiting to see what might possibly come next.

Waiting also provides the space for spontaneous connection with other people. With nowhere else to go, I was suddenly so much more aware of the others who would normally be a blurry mass as I rushed past them in all my routine efficiency. The woman who spoke no English smiling at my creative attempts at French, side by side, trying to determine if we were each in the proper line for our destination. Or the elderly man sitting next to me on one leg of the train ride confessing to me that he didn’t like how fast the train was travelling and he was quite worried about it going off the tracks.  Fellow travellers acknowledging each other as they are, in that moment.  A small, insignificant connection but a connection all the same. 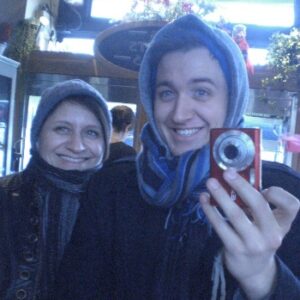 And finally, at the very core of the waiting gift bag, I discovered the genuine treasure of companionship. As a true fan of solitude, I’ve plumbed the depths of often being alone, occasionally used it as a crutch, learned so much about myself through it and know that it needs to be a regular part of my every day. But nothing could have prepared me for the joy of sharing this adventure with my son who was a last-minute addition to what was planned to be a solo journey. Seeing the unabashed enjoyment that I was already experiencing reflected back to me so clearly in my son’s face was priceless. The daily camaraderie, creative and collaborative problem-solving situations, working at open communication even through disagreements and the memories created was a genuine gift that will keep on giving.  And it has convinced me that even me, an introvert’s introvert, even I am wired to be in close connection with others.

The writing is clearly on the wall. Travel is a good teacher and I, the student, am ready for more!

a mind of its own